Dionisis Chistofilogiannis: First of all, thank you for taking the time to do this interview. We meet in Space52 in your exhibition and I would like to ask you to talk briefly about your biography.

Clementine Bruno: Hello, I am delighted and thanks for having us today. To give you a brief introduction I am currently finishing a Master in Art (Painting practice) at the Slade School of Fine Art in London, a city in which I also fulfilled my Bachelors Degree, in History of Art and Fine Art practice, at Goldsmith University until 2017. Before engaging my studies in the UK I was based in Paris. As regarding my professional career, we recently had series of group shows with Ellie Antoniou and Ruyin Nabizadeh in collaboration with two curators: Adèle Koechlin and Julia Thoma (The Gold Figure). It is those nomadic set of exhibitions, (London/ Paris / Basel) that lead us to organize the show in Athens at Space 52 last February. Lately we have been collaborating Ruyin and myself for an exhibition in Paris organized by Marie Madec (Sans-Titre, 2016), which enabled us to show our installation Plotting the Thinginess of the Thing (2018).

CB: I generally struggle with the conception of painting as being what closely link a singular author to its production of marks, as original traces of an artistic activity, what Isabelle Graw conceptualise as indexicality1. When confronted to the production of images in that specific field, I find it rather easier to think that somehow, those images already exist as model, as generic pictures, waiting to be repeated by different individuals within different context.

What I mean here is that every image already exists as representations of a representation from their own subject matter within various historical/cultural contexts. Those signs produce within the paintings, thus, referring back to their author (the artist), and back to their qualities as pre-existing images of our cultural landscape, made visible through their forms and content. It is like the simulacrum effect, which creates invisible quotations to other pre-existing cultural referent, and it creates for David Joselit a kind of spatial-scoring, through this emergence of new conditions for contemporary painting2. Thus, those images are part of a collective imaginary and cognitive experience of intense circulation of images, which painting mimics through an appropriative method. 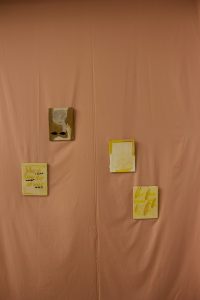 Office paintings, enters that discourse by underlining the quality of images as being preindividual source of information, linked to linguistic forms. In that sense, I am putting in relation ‘an in-between’ of writing3 with the process of painting. It is very much the core of my current research, to understand how painting can be similarly associated within linguistic forms, which images performs under the attitude of signs, stimulating a awareness and underlining the arbitrary relationship between the real and the signifier. As a bigger picture, Office paintings is presented within an installation which use a curtain to emphasize further on the performative aspect of language, and means to communicate without transcendence. Thus, the installation vocalises the rhetoric relationship between an image and language, which paintings presented on a stage, shouts at each others: it’s like a theatrical scene of communication, between this system, the space and the viewer. As for the choice of the title, which is always a manner to drive and hold all of these ideas together by shadowing back to this interplay between words (the title) and a picture (the installation), I liked the idea of a complete misunderstanding between what you conceive as an office (a cold, corporate, objectified, goal oriented) space and those paintings as intimate, casual, warm or welcoming. In that sense, they are two opposite poles of direction that meet in their description of a possible interpretation of time, embedded in effects of a durational routine. Yes, that is what I intended, to lead you on thinking about what the effect of a repetitive time means, to you, to people in general… Thus, you can understand Office paintings, as a grammatical constellation of images, a non-linear alphabet that engage the viewer in a semiotic subjective game, which signs are waiting to be looked at.

2 Joselit, David. ‘Marking, Scoring, Storing, and Speculating (on Time)’ in Painting Beyond Itself: The Medium in the Postmedium Condition. Berlin: SternbergPress, 2016.

DC: How did you experience the fact that you exhibited in Athens a body of work and research produced during the last months in London?

CB: Space 52 as a location offered so many possibilities on how to show works, but also on appropriating the space for making a specific in situ installation, it was thus thrilling to organise this show. I personally have never been to Athens before, so it was hard to project myself before hands. However, it may seems purely formal, but having to travel there from London offered an interesting set of restrictions on how to conceive theelements of the show, which is always an interesting motor for making work.

Thus, you don’t start from zero but with a set of imposed rules, which have to be ‘transcended’.I was really curious to see how people would response to works presented, which is always different in any situation. In that case, I appreciated the implication and care some people took when encountering the show: engaging with the tempo of the exhibition as offering an inexhaustible shift from state to state. It also seems that Athens offers a very interesting horizon for welcoming young art scene. Not carrying about hierarchy, the city has a very horizontal vibration toward knowledge; at least it was my impression.

DC:  What is your view from the front? Do you have specific projects or goals that you are looking for in the near future?

CB: This question we would like to reply as a group.